The Meland Foundation is pleased to announce its 2018 nurse scholarship winner. 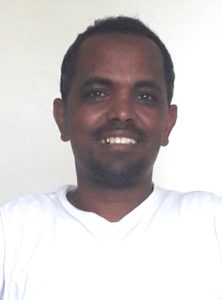 While many things about this applicant are out of the norm of our scholarship guidelines, the Meland board members who interviewed our selection as well as his references doubt we could award this scholarship to anyone who offers more hope and courage.

Our selection, Huruy Medlin, is described by his mentors as “thoroughly honest,” “remarkable,” and “extraordinary.”

His scholarship will be used for studies at Trocaire College in Buffalo, New York.

Huruy Medlin is a refugee from Eritrea. He has been living in New Haven, Connecticut where he was mentored by Duane Isabella, a volunteer with IRIS, Integrated Refugee and Immigrant Services.
Mr. Isabella helped Huruy get a GED, earn his citizenship, and find work but quickly discovered that Huruy was valuable in translating for other refugees and gave back as much as he received. This was confirmed by the IRIS director, Chris George.

Mr. Isabella discovered that Huruy wanted to continue studies, begun in Eritrea, to complete his nursing degree. Mr. Isabella’s wife is the chaplain at Yale and helped him connect Huruy with Heather Reynolds at Yale’s School of Nursing. She, in turn, helped him take courses at the local community college and ultimately led him to the program in which he is now enrolled in Buffalo. He is doing this slowly as he is working at the same time.

Mr. Isabella said he “couldn’t recommend anyone more thoroughly.”  Ms. Reynolds states that Huruy has a mission to give back and feels he will ultimately work with “marginal communities.”  Mr. George said he is someone who will “pay it forward.”